At the start of the pandemic, there was uncertainty about how water and wastewater utilities’ revenues and finances might be affected. Many utilities and local governments were concerned with loss of revenue from the commercial sector, as well as the financial implications of statewide moratoria on late fees and disconnections for non-payments designed to ensure that everyone has adequate access to water and sanitation during a designated public health emergency. Various polls and case studies were analyzed to gauge early and ongoing effects on the utilities’ financial condition. Now, the release of audited data in local governments’ annual financial statements provides additional information and insights. This blog post summarizes how over 300 local government water and wastewater utilities in North Carolina fared at the end of Fiscal Year 2020 (end of June 2020 for all local governments in the state) compared to previous years. The audited data include the first three months of the pandemic. 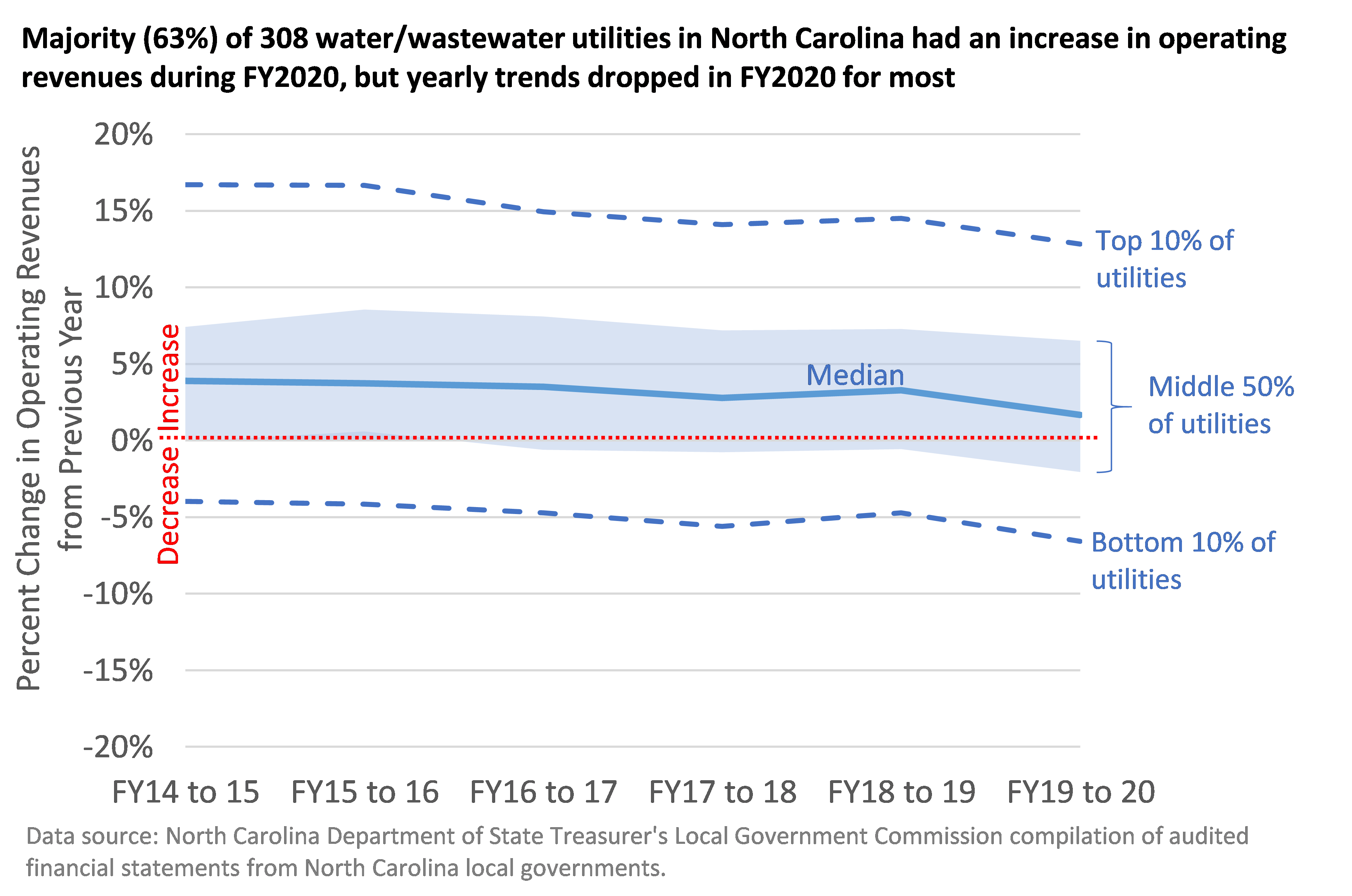 From a financial condition perspective, the fact that most utilities still experienced rising revenues is positive. However, there were only three months of the pandemic affecting FY2020’s finances, and this dip in rising operating revenues might be an indicator of more significant declines or slowdowns during FY2021.

One measure of financial reserves is Days Cash on Hand, which estimates the number of days of operational costs that can be covered by unrestricted cash and investments. Monitoring reserves has been especially important for utilities that had lower than expected revenues, since reserves are often relied on to fill revenue shortfalls. In a previous blog post, we indicated that reserves and days cash on hand had been rising significantly in recent years in North Carolina, positioning utilities well to weather many months of revenue shortfalls.

During Fiscal Year 2020, half of the utilities in North Carolina had a decline in their Days Cash on Hand. However, this trend was similar to Fiscal Year 2019, a full year prior to the pandemic. In fact, mostly due to building up of reserves that occurred prior to FY2019, the average days cash on hand among the utilities in the state in FY2020 was still higher than the average in FY2016. The decline in days cash on hand among some utilities were significant (more than 20% declines in one year, which can be a cause for concern among the utility managers), but overall, statewide, not significantly more than in recent years. 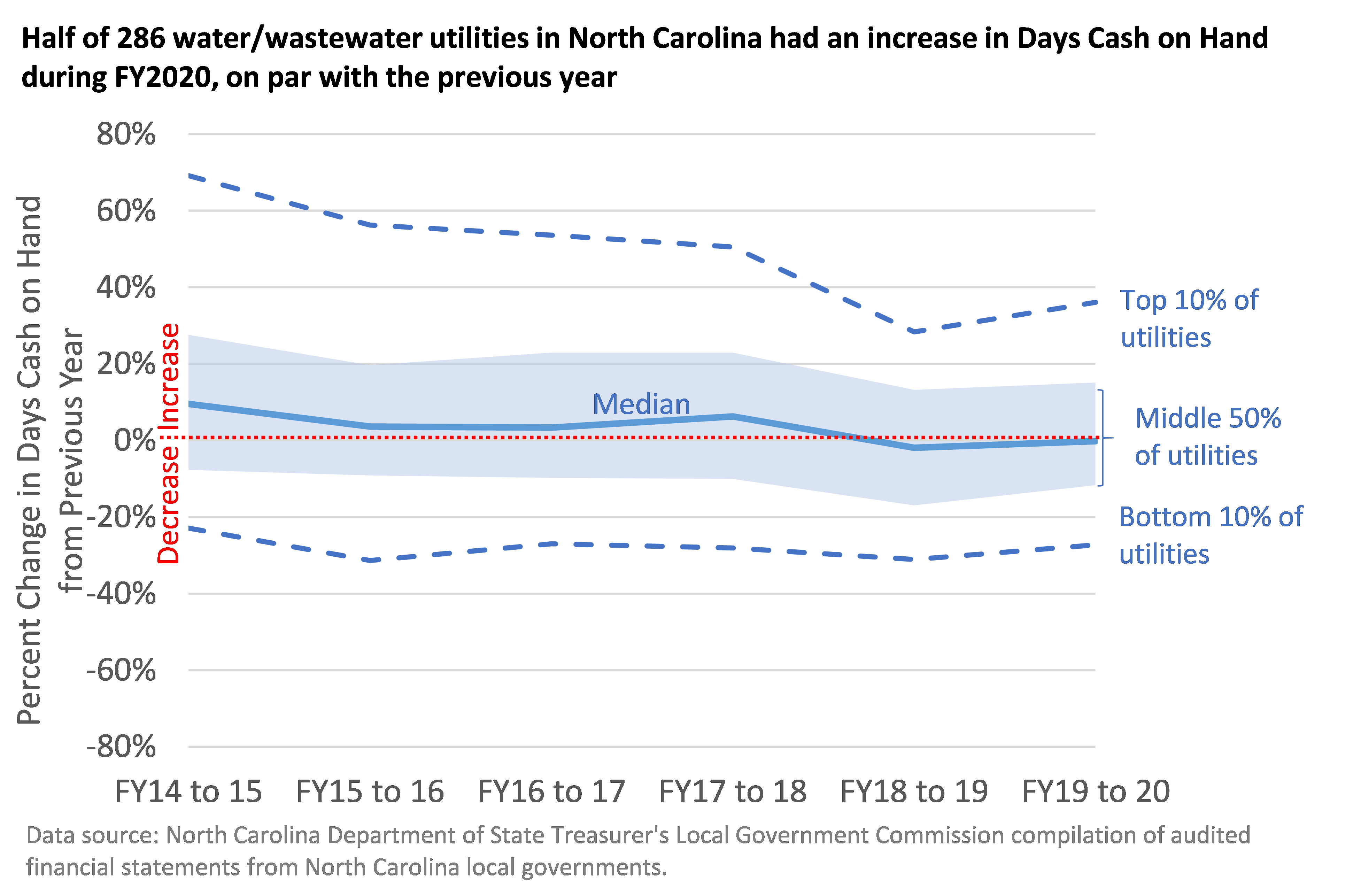 Utilities that experience financial difficulties are often utilities with smaller customer bases and fewer resources. However, in assessing the trends in changing operating revenues and changing days cash on hand in FY2020 compared to previous years, there was no statistical correlation with system size. In other words, large utilities and small utilities were equally likely to experience declines or increases in operating revenues and days cash on hand during FY2020. This result affirms that the pandemic affects each utility uniquely based on its customer base characteristics and financial management decisions. It is difficult to generalize the effects of the pandemic on all utilities, or all utilities of a particular size, given the variation of outcomes identified above.

While assessing FY 2020 audited financial statements in one state provides an early assessment of the effects of the pandemic on utilities’ financial condition, only the first three months of the pandemic were included. More trends will be revealed with the release of FY 2021 audits in North Carolina that will include a full year of the new normal’s effects on utilities’ financial condition.

Shadi Eskaf joined the Environmental Finance Center at the University of North Carolina, Chapel Hill in 2004 and has worked on environmental finance projects in local, state, and national settings. Shadi leads teams conducting applied research on a range of topics, including but not limited to water and wastewater rates and rate-setting, utility finance and management, water consumption, infrastructure capital needs and funding, and utility partnerships. Shadi has a Master’s degree in Environmental Engineering from the University of North Carolina at Chapel Hill.